Officially the eve and the three following days are given a public holiday but the rest four days are also days off work as they are taken from weekends. In 2019, Chinese New Year occurs on Tuesday, 5 February 2019.

Every year in this calendar is represented by a zodiac animal sign and there are twelve animals in total. The signs repeat every twelve years. This festival marks the start of a new lunar cycle and is called the Spring Festival in the northern hemisphere as it occurs between the December solstice and the March equinox.

China follows the Gregorian calendar for official and business dates but takes resort to the Chinese calendar for the festivals. The Chinese New Year Festival was started for two main reasons- 1) to celebrate a year of working hard and enjoy with family and friends and 2) to wish for a lucky and prosperous upcoming year. This day is a public holiday in China along with countries like Indonesia, Malaysia, Singapore, South and North Korea and Vietnam.

The New Year’s Eve dinner is called the ‘reunion dinner’ and is considered to be the most important meal of the year. Red is believed to be the main color of this festival and starting from the streets to every building and house; it is decorated with the auspicious color red. There are red lanterns hung on the streets and red couplets are pasted on doors.  Small towns and rural areas hold many traditional celebrations like setting of firecrackers, dragon dances and worship of ancestors.

Temple fairs host lion dances and other imperial celebrations along with a wide variety of traditional Chinese products and snacks kept on sale. Beijing’s temple fairs are famous and take place right from New Year to the Lantern Festival. A traditional Chinese dance is performed by colorfully dressed men and women on the Rice Sprout song on this day in North China. Like Christmas, people are seen to exchange gifts during this festival too and the most common gift of the lot is money in red envelopes.

Good luck, prosperity, success and happiness is denoted by the color red and so red envelopes are used to gift money to the children and the senior members of the family. The working adults are generally given other gifts. People keep their doors open to let good luck enter on New Year and red lanterns are hung to ward off evil spirits.

It’s a tradition to eat certain food during this festival because of their significance based on the names or appearances.  Fish is a must have on New Year’s Day as the Chinese word for fish sounds the same as that for surplus. Eating fish on this day is supposed to bring an excess of good luck and prosperity in the coming year. 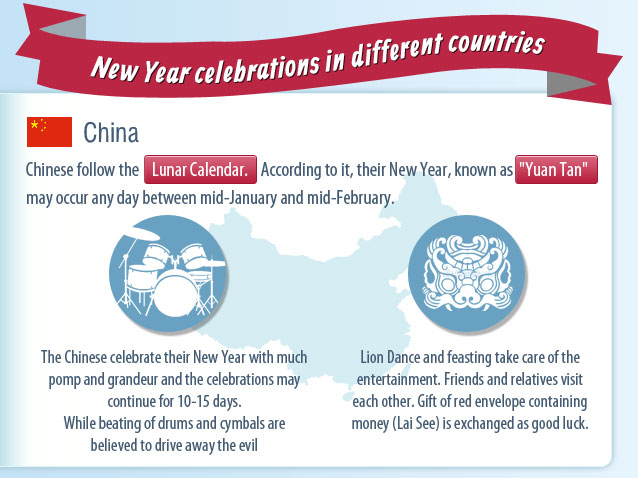 Other apt Chinese New Year foods include spring rolls, glutinous rice cakes, dumplings and sweet rice balls. It’s an age old tradition to set off firecrackers when the clock strikes 12 on New Year’s Eve. The custom is to set off one string of small firecrackers at the start which is then backed up by three big firecrackers. This custom represents the “sounding out” of the previous year and the ‘sounding in” of the future year. The more the noise of the firecrackers the better and luckier the new year is believed to be. Yet another thing that is considered to be a blessed activity on this day is praying for the upcoming year in a temple. Thousands of people flock to Longhua Temple in Shanghai on this day every year to pray for health and good fortune. Another unique ritual of this festival is that wearing red underwear is believed to ward off misfortune and bring good luck.

Chinese people take their superstitions and beliefs very seriously. They believe that whatever they do at the start of the year will affect the rest of the year and hence there are a few taboos which are cautiously prevented by them during this festival. They believe that they mustn’t clean their houses or wash their hair during the first three days of the festival as doing so can sweep out or wash away the good luck. Secondly, the crying of a child during this time span is believed to bring bad luck to the entire family and hence children are very pampered and taken care of. Another one of the taboos is that people should not beg or ask for loans during this time.

Symbols For The Chinese New Year

Chinese New Year is associated with various symbols, like flowers are a crucial part of the New Year decorations. Two flowers that are particularly related to this festival are the plum blossom which is said to bring courage and hope and the water narcissus which brings good luck and fortune. Tangerines and oranges are displayed in houses and stores as a symbol of luck and wealth. Writings on a diamond shaped red piece of paper with a brush are regarded as a sign of bringing in good luck.